By Andy Hagerty
As to the ship herself, she was christened on the 8th of June, 1958.  Her length of 729 feet, beam of 75 feet, and height of 39 feet  made her the largest ‘Laker’ built.  She was often a source of attention when passing through the locks at Sault Ste. Marie.  She was built at the Great Lakes Engineering Works of Ecorse, Michigan. She was owned by Northwestern Mutual Insurance Company, which made them the first American insurance company to build its own ship. She was named after the head of the insurance company, Edmund. Her purpose in life was to haul taconite, which is a low grade iron ore, from mines on the shores of Minnesota to steel mills near Detroit and Toledo, Ohio.

Being the “pride of the American side” she was known by several nicknames , including “The Queen of the Great Lakes,” “The Toledo Express,” and the unfortunate “Titanic of the Great Lakes.  She was an impressive sight on the Great Lake.
The ship vanished. Nothing on Radar. Nothing on the radio.  Just emptiness and silence.   When the Anderson made it to the last know location of the Fitz about 8pm to nothing. Captain Cooper contacted the Coast Guard then sailed back into the storm.  He later found a pair of lifeboats and debris.  Of the crew of 29 men and officers, Nothing.  ​
​ On May 20, 1976, the Navy discovered her on the bottom in 535 feet of water.
​  Most of those crew were from nearby Minnesota  with a smattering from Wisconsin, Michigan, and Ohio. In 1995 a team descended and retrieved the ships bell for members of the crew’s families. This bell is rung on the annual remembrance day at the Great Lakes Shipwreck Museum.  It will be rung 30 times.  Once for each crew member, with the 30th time for the other 30,000 souls still keeping the witch of November Company in the cold clear depths of Lake Superior. 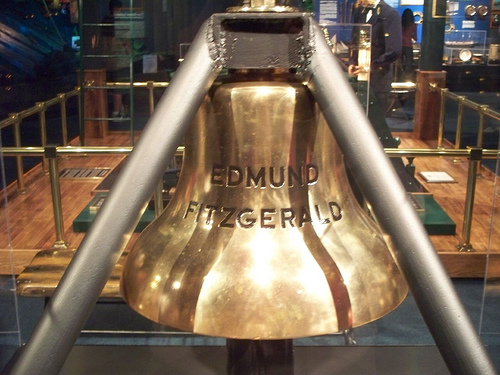 ​  There has never been a definitive explanation for the sinking.  She had rode out storms before in her 17 year career on the lake.  Her captain was experienced and was actually on his last cruise prior to retirements.  Some of the common theories are:

She hit 6 fathom shoal and started to take on massive amounts of water.

The Coast Guard and NTSB theorized that the hatch covers were faulty and failed under the repeated wave strikes on the ship.  However this theory was disproven by the expeditions to her resting place.

She was hit by the three sisters (giant waves) and was swamped. This is a reported phenomenon where three larger than normal waves hit in quick succession often before the water from the prior waves has a chance to clear.  This causes immense weight to be on the deck of a ship at the time.
A wave engulfed the ship, pushing the front of the ship underwater. The ship then hit ground, and broke in two...this may be why the two portions of the ship are so close.
​
Waves lifted both ends of the ship (bow and stern), but the center of the ship containing the cargo was not held by a wave, so the overload forced the center downward, sinking and/or breaking the ship in two. Or conversely a huge wave rode up between two swells and the ship snapped in half.
The witch of November came stealing.

We hope you have enjoyed our story on this doomed ship.  There is so much more to this story than we have the time to relate, and we urge you to investigate and research on your own.  If you come across anything we missed, let us know, we will add that to our future rewrites.  Thank you for reading and keep on Watching the Night .