by Andy Hagerty
The fields are broken into two major types of radiation.

The first type is electromagnetic waves that carry such large quantities of  energy that they can ionize particles of matter and consequently break down the chemical bonds between molecules. X-rays used for both diagnostic and therapeutic purposes (radiotherapy), gamma-rays (emitted by radioactive materials) and cosmic radiation, all have this ability and are known as ionizing radiation.

The second type of Electromagnetic fields which cannot break down molecular bonds are called non-ionizing radiation. Many artificial sources of electromagnetic fields, by which we are surrounded daily (including radio signals), are non-ionizing. In other words, the quantity of energy they carry cannot break down chemical bonds within cells and tissues.

Scientific research over many decades has enabled national and international health authorities to establish safety limits for exposure to electromagnetic fields. Exposure limits vary depending on the type of EMF and incorporate large safety margins for added protection. EMF sensitivity and higher levels can result in a “fear cage” phenomena.

The 'fear cage' is a place where high EMF, usually a small room or enclosed space. There is a high levels of emissions due to the presence of many
wires, cables, and general electrical goings on. This location can cause much havoc with the psyche of a subject either because they are vulnerable and less tolerant or exposed for long periods of time. This exposure can cause un-easiness, nausea, headaches, dizziness, and general feelings of anxiety and paranoia. Two main theories on the phenomena state that sometimes these feelings can lead to the misunderstanding that there is a presence or paranormal being in such a place. Conversely, if a spirit is believed to be able to harness the power from the EMF, this may be a spirit induced phenomenon.
Tiny electrical currents exist in the human body due to the chemical reactions that occur as part of the normal bodily functions, even in the absence of external electric fields. For example, nerves relay signals by transmitting electric impulses. Most biochemical reactions from digestion to brain activities go along with the rearrangement of charged particles. Even the heart is electrically active - an activity that your doctor can trace with the help of an electrocardiogram. This also contributes to micro movements on the body, a factor that needs to be taken into consideration when evaluating investigative techniques like pendulums or even dowsing rods.

Low-frequency magnetic fields induce circulating currents within the human body. The strength of these currents depends on the intensity of the outside magnetic field. If sufficiently large, these currents could cause stimulation of nerves and muscles or affect other biological processes.

Both electric and magnetic fields induce voltages and currents in the body but even directly beneath a high voltage transmission line, the induced currents are very small compared to thresholds for producing shock and other electrical effects.

Heating is the main biological effect of the electromagnetic fields of  radiofrequency fields. In microwave ovens this fact is employed to warm up food. The levels of radiofrequency fields to which people are normally exposed are very much lower than those needed to produce significant heating. The heating effect of radio waves forms the underlying basis for current guidelines.  Scientists are also investigating the possibility that effects below the threshold level for body heating occur as a result of long-term exposure. To date, no adverse health effects from low level, long-term exposure to radiofrequency or power frequency fields have been confirmed, but scientists are actively continuing to research this area.

Biological effects or health effects? What is a health hazard?

The EPA safety standard for long term EMF exposure is rated at no more than 1 mG. According to the EPA, anything that emits an EMF higher than that is considered potentially unsafe. However, this is a point of debate, as some organizations rate the safe limit no higher than 0.5 mG, while others believe that anything under 3 mG is safe.

Biological effects are measurable responses to a stimulus or to a change in the environment. These changes are not necessarily harmful to your health. For example, listening to music, reading a book, eating an apple or playing tennis will produce a range of biological effects. Nevertheless, none of these activities is expected to cause health effects. The body has sophisticated mechanisms to adjust to the many and varied influences we encounter in our environment. Ongoing change forms a normal part of our lives. But, of course, the body does not possess adequate compensation mechanisms for all biological effects. Changes that are irreversible and stress the system for long periods of time may constitute a health hazard.

It is not disputed that electromagnetic fields above certain levels can trigger biological effects. Experiments with healthy volunteers indicate that
short-term exposure at the levels present in the environment or in the home do not cause any apparent detrimental effects. Exposures to higher levels that might be harmful are restricted by national and international guidelines. The current debate is centered on whether long-term low level exposure can evoke biological responses and influence people's well being.

Some individuals report "hypersensitivity" to electric or magnetic fields. They ask whether aches and pains, headaches, depression, lethargy,
sleeping disorders, and even convulsions and epileptic seizures could be associated with electromagnetic field exposure.

There is little scientific evidence to support the idea of electromagnetic hypersensitivity. Recent Scandinavian studies found that individuals do not show consistent reactions under properly controlled conditions of electromagnetic field exposure. Nor is there any accepted biological mechanism to explain hypersensitivity. Research on this subject is difficult because many other subjective responses may be involved, apart from direct effects of fields themselves. More studies are continuing on the subject. 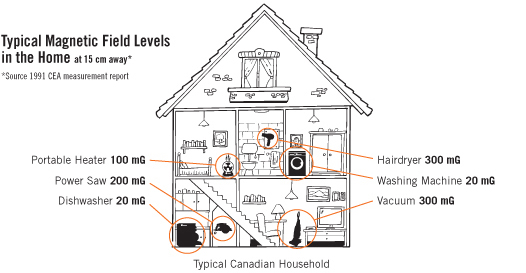 The strength of electromagnetic field is affected by the source (current and charge strength) in the environment. In is gauged by its
proportional strength from the source. For example, if your magnetic field is generated by a current, then if you double the strength of the current, the strength of your magnetic field will also double, but when measured a distance away, the as the current weakens the magnetic field will as well. The measurement that is normally given as the units to measure electro magnetic field strength is ‘milliGauss (mG)’ or micro Tesla (named after Nicolas Tesla). The EMF devices used in paranormal research are thus called 'EMF meters,' when
in reality they are only Magnetic Field Detectors. Thus it’s worth pointing out that although many EMF meters provide their measurements in milliGauss (mG) the actual unit of measure is called the S.I. Unit (International System of Units), a standard and preferred unit of measurement by scientists.
Sources of high EMF to look out for during a baseline sweep.
- florescent lights.
- power transformers (this includes the large plugs for chargers)
- alarm clocks ( note some alarm clocks give off 10mg up to 3 feet away.  It is the same as sleeping under a high voltage line.)
- Some telephones emit a high EMF and some do not.
- Microwaves, ranges and dishwashers, even when not in operation.
- exposed copper pipes may pick up and have a reading, this is caused by not properly shielded wire runs and should be looked at by an electrician.