By Andy Hagerty
Just north of the pass on rt 322 at Seven Mountains there is a split in the road.  Most people bear left and head off to State College and never venture to the right.  If they were to turn right and go up rt 144 there they would find a little cluster of houses in a place called Potter’s Mill.  General Potter build one of the first of these houses in 1788.  The Potter family had outgrown the original log cabin by 1823 and constructed the building that would eventually become the Eutaw house.  The Eutaw was a tribe of local Indians that lived up in the mountains. The House was a grand hotel in her day, but eventually became more of a Bar and Restaurant in her later days. She is currently closed, and appears to be since about 2010.

The main legend is that while in the area to dispose of some family property, Edgar Allen Poe stayed here.  The is also supposed have written
several of his major poems there. There was even a table at this location that had the initials “EAP” attributed to be the work of the famous writer.  However most historians dispute this as Poe appears to not have been in the area and living in New York and Baltimore during his alleged time spent in Central Pa.  The fake tales are attributed to Henry W. Shoemaker in the 1920’s. He is often called a "fake-lorist” as he wrote a lot on local folklore that has been proven false. People say they have see a ghostly image that looks just like Poe haunting the house. The man is described as slim, with dark hair, a dark mustache, and a dark complexion. He has been seen with them both outside and inside of the house.

An early story of the haunting may have been caused by activity that happened shortly after the original cabin was built.  Indians would come down from the mountain to raid the Eutaw House for horses. During one such raid, one of the Indian men was captured and hung. Witnesses have heard what sounded like the creaking of a rope and the sound of something soft and heavy thudding against the tree if the wind was heavy. These sounds seemed to come from a large old tree at the corner of the property.

From an article dated June 22, 1993 the following tale was told.:  “Manager Damian Kastner said one of his favorite stories involved a nosy woman who couldn’t resist opening a closed door on the second floor. The woman claimed to have felt the proverbial chill up her spine, and when she opened the door, saw an old man dressed in colonial garb who politely uttered, "pleased to make your acquaintance."

In the same article Freya Phillips ( the then co-owner) related One morning, a waitress was cleaning the bathroom before the restaurant opened. She said she saw someone standing behind her in the mirror, but when she turned around, no one was there.

Another story of the House goes back to when it was a stop on the stage coach route. A prison wagon stopped in, which was not too unusual of an
occurrence. The prisoner was locked up in the attic for safe keeping. During the night, he either hung himself in the attic, or was shot trying to escape and was carried back up to the attic where he expired. We are not sure which version is more correct, but either way the story places a man expiring in the attic.

A waitress once reported that one night when she was working she had an experience in front of a table of witnesses. She had just brought to the guests food on a tray and placed the tray on a small folding table, to pass out the food.  The tray picked itself up and flipped over upended all the food onto the floor. This apparently happened more than once as we are getting other people mentioning a like experience.

Many of the stories we are hearing, state the second floor bathrooms were very heavy, creepy, and usually oddly chilly. Many of the people
felt that they were being watched. A cook who worked there in the 1990’s related a tale ”when they had the EAP the Raven dinner and a show there. I was cooking that night had to use the rest room and went up stairs and yes it is very creepy up there in the dark. stopped at the top of the stairs there was a man standing there dressed in the time that EAP would have been, I thought nothing of him at the time thought he was part of the show I asked him how the show was going, he said nothing and looked away I remember thinking that was rude, went to the rest room. Came out he was gone so i went back to the kitchen. The next night I was off work so I went to the show with my husband and a friend. When I was finished watching the show I thought to myself that I did not see the gentle man in the show that I seen the night b4 standing in the door way. So being that I worked at there I got to visit with the cast and I asked if they changed any people out for others they said no. I came to find later that week after telling Patty about it and told her what the man looked like he tells me that i just may have seen EAP watching his own play being brought to life. I can tell you one thing  that I have never went up those stairs to use the bathroom alone again after that. Still gives me goose bumps to talk about it.” (EAP stands for Edger  Allen Poe)

A second story she relates goes like this “Patty (the owner at the time) and I were in the fire place room painting and she was on a ladder
painting some ivory on the wall (and if anyone has ever dropped a paint brush b4 u will know that it always falls brush down when full of paint) she dropped a  paint brush and it fell with the brush straight out and made a green line down the wall. She nearly fell off the ladder and ask me if I seen that, I sure did I said and we left the room.”

Other reported phenomenon include: Images have been seen in mirrors of people that aren't there. A woman and little girl have been reportedly seen crying on the main stairwell. Every morning the staff would find one of the dining room tables apparently used for a meal by three people. A little girl of about seven has long been spotted on main stairs, in the yard and less frequently around the rest of the house. A woman in black mourning dress has often been seen on the stairs, sometimes in the company of a child. There are phantom footsteps, lights turn on and off on their own. 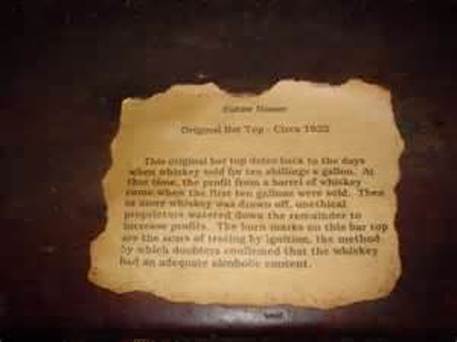