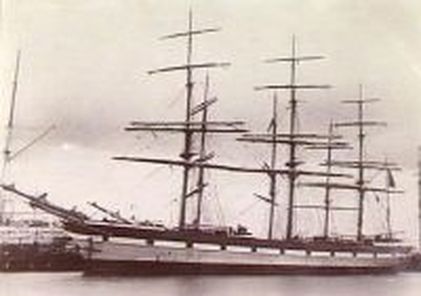 In 1843 a new ship was commissioned by the royal navy.  The HMS Eurydice was not just another 26 gun frigate.  She was designed with a very slight draft so she could operate in shallow costal waters. She served with distinction on varied stations including North America, South Africa and the west Indies. She even sailed into the white sea during the Crimean war in 1855-1857. She was the second ship in the navy to have this name,  The
first was decommissioned in 1834.

She then took a 20 year break from the sea as she served for about 20 years
as a dockside training ship. In 1877 she was refitted and went to sea as a sea
going training ship. She was just completing a three month training run from Bermuda to Portsmouth when she sailed into history.


It was a dark and stormy night on 24 March 1878.  The HMS Eurydice ( Captain Marcus Augustus Stanley, commanding)was caught in a heavy snow storm off the Isle of Wight.  A gale suddenly came up in the otherwise calm night and caused her to founder, Her fate may have been partially due to her shallow draft as she capsized and sank in the storm. She has full sails and gun ports open when she was hit by the storm. One of the survivors recounted the captain gave the orders to reef in the sails, but the crew was unable to do so due to the ferocity of the storm. She heeled hard on her starboard side, where the sea rushed into the open gun ports. Of the 319 crew and trainees on board, only two
survived.  Most of those who were not carried down with the ship, they died slowly and agonizingly of exposure in the freezing waters. This was at the time the worst disaster of the peacetime Royal Navy.

One of the notable people to give witness to the ships passing was a then four year old Winston Churchill, who was living in Flint Cottage in the town of Ventnor at the time. This was a national tragedy and much was reported in the current papers.  The outcome was that eventually with the loss of a second repurposed training ship in 1880, all future training ships were purpose built for training only.
The legend of the Eurydice seems to have began before she sank:  On the afternoon of the 22nd March 1878 in Windsor, the Bishop of Ripon and Sir John MacNiell were dining with Sir John Cowell when MacNiell suddenly exclaimed, "Good Heavens! Why don't they close the portholes and reef the sails?".  When asked by Cowell what he meant, he replied that he didn't know, but had had a vision of a ship coming up the Channel under full sail with her gunports open while a great black squall attacked her.

In the 1930’s Commander F. Lipscomb of a royal naval submarine which took evasive action to avoid the full rigged ship only for it to disappear.

On October 17, 1998 Prince Edward of England reportedly saw the three-masted ship off the Isle of Wight.  He was filming a piece for the television series "Crown and Country". The film crew claimed to have captured its image on film. We have as of yet not been able to get a copy of the film clip.  If anyone happens to have a copy of the series, we would love to see it for ourselves.

The ships bell rests in St Paul’s church in Gatten.  The crew of the Eurydice appears not to have found that rest and sail the seas around the Isle of Wight for eternity.  One day they may finally reach Portsmouth. One hopes they reach their destination. They still sail, forlorn, but not forgotten.  Hopefully someone will get a chance to document them prior to their arrival. 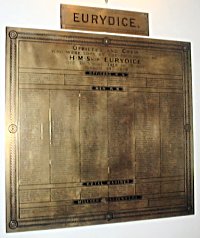