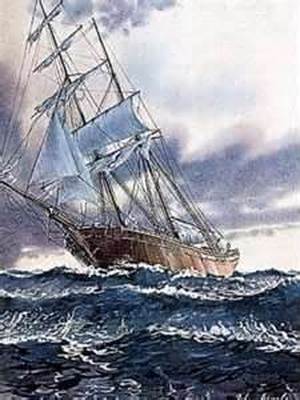 The United Kingdom has a long tradition of ghost ships. One of these bits of  lore is about a ship named Lady Lovibond. The Lady L was a three mast schooner that was full of love.  Her Captain, Simon Peel, was madly in love with Annette, the woman he had just married. The Ladies first mate was also in madly in love, sadly it was also with the captains new wife.

The tale we tell of twisted love starts on the fateful day of 13 February 1748.  With the marriage so recently consummated Simon Peel decides to take his wife for a pleasure cruise to Portugal.  There is a long standing traditions that taking a woman aboard is bad luck. This sailors tale may also be true for  long car rides.

Alas for the lovebirds, the pleasure they experienced  only heightened the pain in the maddened John Rivers, the first mate.  His rage grew as the couple’s joy and love grew.  At some point John grabbed a belaying pin, and attacked the helmsman.  The poor sailor stood no chance against the maddened  Mate, and was  soon dispatched and tossed over the side.  John then heeled over and made a  course for the notorious Goodwin sands. The captain, the bride and 50 guests  were belowdecks when they arrived.  On those infamous sands all aboard met a grizzly fate as the ship went down with all hands.

At the inquiry into the disaster Rivers’ mother testified that her son had vowed his revenge. At the time of the wreck it had been a clear, storm less
night. So the inquiry finding no other reason then sabotage, recorded the wreck of the Lady Lovibond as a misadventure. Thus ended the story of The lost Lady Lovibond, or did it?

Nothing was heard of the good ship, till 50 years later.  In 1798 several different Ships captains reported seeing the lost vessel in the waters around the sands.  Every 50 years afterwards as well.  She was spotted in 1848 and 1898.  On the 1848 event local fishermen saw a vessel wreck on the area and lifeboats were sent out to investigate, with no sign of ship on the sands being found. The 1898 anniversary she again looked so real that several ships in the area actually launched small boats in an effort to assist the distressed ship. She was most recently spotted in 1948.  In this sighting Captain Bull Prestwick described the ship as looking real but having an eerie green glow There were no reported sighting of her on the 1998 anniversary.

The next anniversary is 13th February, 2048. If you don’t feel like waiting another 35 years for the good ship, you can still go to the sands and maybe see one of the many ships that perished upon her 10 mile length. Over 2000 ships have gone down in peace time and two major ocean battles have been fought on or her the Goodwin Sands.  In 1703 alone in a great storm 13 men of war and 40 merchant vessels went down in one blow. This is also the supposed location of  the legendary island of Lomea. In 1824 the local harbor master decided to have a cricket match upon the infamous sands.  As often seems to happen in England, they decided to make it an annual event that still carries on to this day.

Were the raw emotions on that day so powerful that the ship comes back every 50th anniversary? Was it the fact that on the day she sailed it
was a Friday the 13th of February? Was it the fact against all traditions the Captain set sail with a woman onboard?  It could have been any,
all and none of those things.  With the ship missing her last date with the living, we at night watch can only hope the ill fated lovers can finally find peace and rest in each others arms.