By Andy Hagerty
Although our main focus is not on crypto zoology, when we learned of a Loch Ness type beastie only minutes from our home in Central Pa, we had to check it out and share it with our readers.

Raystown lake is a 8,300-acre lake in Huntingdon County.  The lake is the largest lake that is entirely within PA with depths of up to 185 feet in
spots. 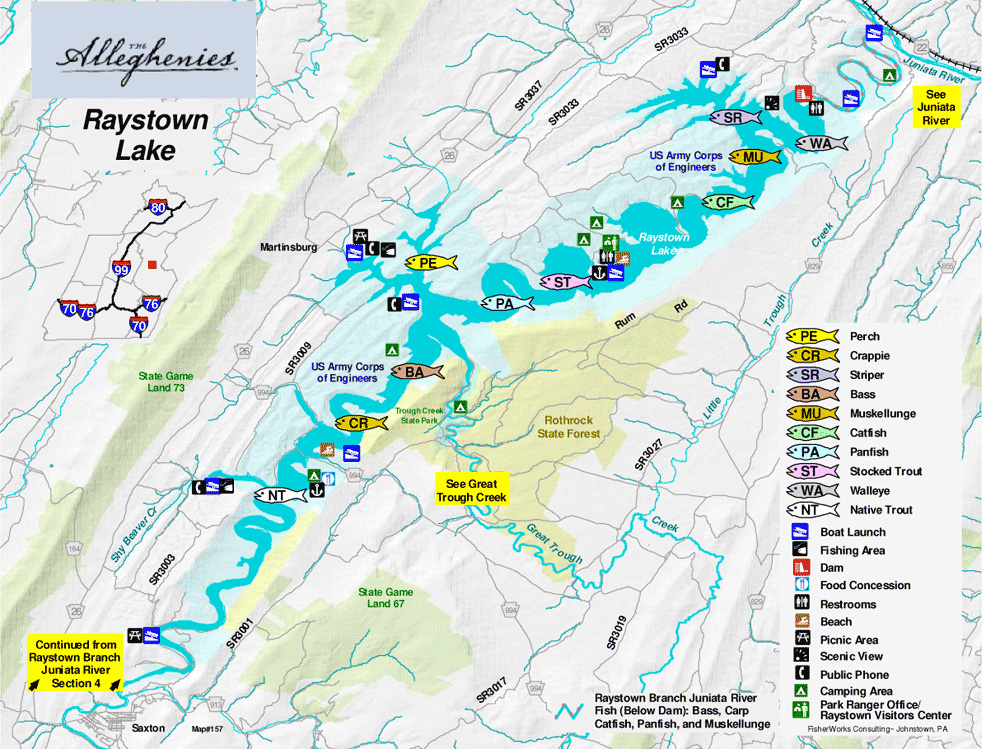 The sightings have been going on for decades, however the Phenomenon that is Ray seems to have started to gain national attention in about 2006 with sighting of a 40ft plus beastie and photographs of it on the surface near the visitors center.  In 1962 a waterskiing show was almost canceled when a 20-30 foot dark shape was photographed around the exhibition area.

“I believe it must be a vegetarian. We have not seen any evidence of this animal taking fish, geese, otters, or ducks. So I would suggest that our  swimmers and boaters are very safe. It appears this animal's habits are similar to Manatees, which are completely herbivorous and gentle. The increase of weed beds around the lake is probably providing more food in the shallows for herbivores and that would increase sightings."
A Raystown Lake staffer of the US Army Corps of Engineers

On August 29, 2009, I was fishing from a boat with my son on Raystown Lake, Pa. It was around 6:45 pm and we were making our way back to the landing. We were near the Snydertown portion of the lake where there is a point of land.

As we were heading south, I looked toward the west shore after my son started to point at something. I really have NO idea what this thing was but it looked like a large, thick black snake with a huge head that bobbed in and out of the water. I moved a little bit closer but my son was getting scared, so I cut the motor and looked through my binoculars. The body was moving in coils or humps up and down in the water. The creature had no fins like a fish and the head was diamond shaped. The weirdest feature was that the eyes (which were dark, somewhat small and slanted) were not set on the side of the head...but placed forward. I got an excellent look through the binoculars (I'd say it was about 50 yards from us) when it raised up, it's head moved side to side. It made no sound. I'd say it was at least 20 feet long.I have lived in Altoona, Pa for only a few years and this is only the second time I have fished this lake. I'm from Wisconsin and have fished many large lakes and rivers but I have never seen anything this big.

We watched for about 2-3 minutes until it slipped under the surface. My son's description was very similar to mine but he said he noticed lighter colored 'whiskers' or rays on the chin and face while looking through the binoculars. I had tried to take a photo with my cell phone but it just blended in with the water and was not discernible.

My son found an image on the internet that closely resembled what we witnessed (attached). This is nuts! My friends think we saw a large fish or mammal, but there is no way it's either. Please give me some guidance or resources to help identify this. I am skeptical of monsters, ghosts, ufo's, etc. and don't buy into much of what people describe on TV. But, now that I have seen something that I can't explain....let's say I'm confused and frustrated." Thanks...Bill
Sighting:
May 14, 2006 (John)
While night fishing on the lake May 14, 2006 at around 2:00 am, I noticed something large and dark slowly appear in the water approximately 40 yards away. It was very slowly moving through the water. I asked my friend if he could determine what it was. The visible portion was approximately 8 - 12 feet in length. After shining a Surefire flashlight at it, it submerged. There were no noticeable features such as a head or humps.

Sighting:
June 20, 2006 (Walter G.) I Was enjoying a morning of fishing on 20 June 2006 right straight across from 7 points marina. The sun was starting to make the morning come to life and the fish were starting to jump. It was about 6am and I seen what I thought was a fish, maybe a musky, come out of the water and grab a stick. The stick was about 3 or 4 feet long, and the "fish" was out of the water as far as the stick was long, not showing the tail end. When I came home I told my wife what I had seen and said that it looked like a large leg coming out of the water and garbing the stick. I joked and said that I would have liked to seen the rest of it. Today is 8 July 2006 and my son told my about Ray and I look up the web site, which I never heard of till today. Now I think that maybe I didn't need to see the rest, but could it have been? Sighting June 16, 2006 (Lee, Lea & Family) On the last day of our vacation at Raystown Lake, June 16th , we woke up early in the morning to see what we believe is Raystown Ray. The figure was moving about 100 yards behind our boat while we were tied off at Panther Cove. It slowly made it's way across the cove behind Marty's Island and disappeared into a small inlet. What a great way to end a great vacation!

Sighting:
When: July of 1994. John R. Pendel Pittsburgh, PA
Where: 20 minute cruise from the camp grounds area at Raystown Lake. (only been to the lake once -not sure if there's more than 1 campground)

Sighting It was approximately 9AM in the morning and a friend of mine invited me and my wife as well as his in-laws for a quick morning ride on the calm lake. It was a nice warm morning cruising around 20 knots. Me and my wife were on the stern of the boat, his wife and her parents were on the bow. While my friend was navigating the boat, he turned around and were having an idle chat drinking coffee and about 20-25 minutes into our ride the three of us glanced off the port side of the boat and all at the same time seen ripples in the water, a long dark somewhat shiny black object that surfaced to the top of the water, then it seemed to spin and turn over and then submersed and disappeared. He immediately shut down the boat in amazement, the 3 of us asked each other, "did you see that?" His wife and her parents were asking what was a matter and we were speechless.The size of the object was at least 10 to 12 feet long putting into perspective we were riding on a 19 foot open bow boat. The object was approximately 40 to 50 feet away. Never-the-less we finished our cruise and reported our findings to the rest of the group we were camping with and obviously no one believed us. To this day we still talk about what we saw and we still get harassed about the "fish story". A friend of mine sent me this link today thus the reason for just reporting it now. Now we have proof to our doubting Thomas friends that others have seen what we seen that day. John R. Pendel Pittsburgh, PA

I heard about this Raystown Ray a few years ago and thought it was just a hoax to get more people to the lake. But after Sunday August 3rd I'm not so sure that he doesn't exist. It was 7:15 PM and we just loaded the jet skis and started to dry them off. My girlfriend jokingly said "Look, Its Raystown Ray"! I looked to see what she was talking about and saw a neck and a head sticking about 3 to 4 feet out of the water and it was striding toward a boat that was coming into the no wake zone at the 7 Points. We watched it for about 3 minutes. We saw a wake in the water from its neck and about 15 to 20 feet behind that wake was another wake, but we couldn't see what was causing that wake. It disappeared the closer it got to the boat. My mom, dad, girlfriend and I all saw this thing. If it wasn't Raystown Ray, I would like to know what it was!


SIGHTING
August 2008  Penny Foor
One warm still evening, during late August of 2008, we decided to drift the boat out off shore to do some night fishing, right at the bend of where we camp at the Senoi sites, that is just around the corner from Seven Points. Well, we were using our new 'fish drawing' light (it is neon green, longer than a floresant light, waterproof of course...and guaranteed to draw in fish when dropped overboard with a rope and a wieght to pull it down to about 30 or so ft.)  Anyway, we were using the light, fishing in the stillest water (like black glass) so calm, no breezes, just quiet. Well, along about 11-12pm, we were deciding to head back, we were just sitting there on the stern talking and enjoying the calmness of the warm night. All of a sudden, from out in the middle of the lake, there was this whooshing sound, I thought it might be a boat, but there were no lights, no motor sound, just the sound of water swooshing straight towards us. He grabbed the spotlight and about 100 feet from our boat, there was something...looked like an upside down canoe, rushing thru the water, at us! He told me, "grab that fish light, now! get it up!" (I had actually forgotten about it) I grabbed for the rope and started pulling like crazy! He kept the spotlight on the thing as I grabbed hand over hand trying to get the underwater light up and in the boat. As soon as I got the light up, I turned it off, and stood there with him watching this thing get closer, it came within 30 ft of the boat when it went completely under, where it went I have no idea, but it left a wake that shook us in the boat, we rocked enough to almost push us to shore. I tell ya what, we headed back to camp, and sat in the RV drinking tea, and tried to make sense of it. There are no fish that act like that that are native to the lake. Not even eels break the water like that. And definitely none that big. We know fish at the lake can get huge, but they lay at the bottom, they don't even hunt at the surface. After seeing this site, we wonder if this may have been a "Raystown Ray" sighting. We have heard the swooshing in the water late at night, from our campsites on shore, at various times of the year, and you can only see the water breaking under the light of a bright moon, it makes me think that the cove by the Senoi campsites may be a "play area" for whatever it is.