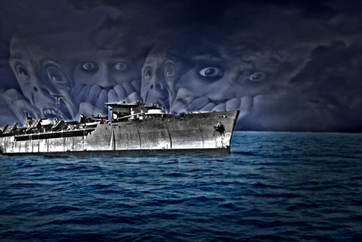 On a hot day in June of 1947, the radio rooms of several ships in the straight of Malacca burst into life.  A May Day is being broadcast.  Somewhere in the hot steamy ocean, a ship full of sailors is in trouble. The S.S. Ourang Medan is a Dutch ship and things are going wrong upon her.  The SS Silver Star and others copy the following Morris Code message:

“All officers including captain are dead lying in chartroom and bridge.
Possibly whole crew dead."

Following a series of garbled transmissions the phrase “I die”.

Dutch and British listening posts triangulate the location of the SS Ourang Medan and locate its approximate position within the straits of Malacca. The Silver Star is the closest and proceeds at their best speed to the troubled ship.  Upon finding and reaching the ship, a rescue party mans the small boats and boards the eerily quiet vessel.  The rescuers find the ship undamaged and intact.

The crew is another story.  All members of the crew including the ships dog are found dead.  The dead tell no tales as there are no signs of injury upon any of them.  The just lie there with eyes open to the hot sun and faces twisted into revolting visages of agony and horror, many with arms extended like they your pointing at the sky or fending something off. A May 1952 report of the Proceedings of the Merchant Marine Council put it: “their frozen faces were upturned to the sun, the mouths were gaping open and the eyes staring…”  The captain remains were on the bridge, the officers were in the wardrooms the radio operator was still in the communications room, his now cold hand still on the Morse Code transmitter. It appears all hands have perished at their work  stations. During the search the crew notes an unnatural chill in the cargo holds. This is written off in the moment as the outside temps reach 110 degrees,  so any shade must feel cooler.

The rescue crew looks to try to salvage the ship and bring her into port to get answers to this mystery.  However, shortly after they get a tow line to the Silver Star, things get stranger. No sooner is the tow line secure, then flames explode out of the cargo hold #4 and engulf the cargo decks in fire. The ship itself quickly explodes so violently such tremendous force that it “lifted herself from the water and swiftly sank.”

The crew is forced to get off the ship before they can really get any answers.  They barely make it back to their own ship before the Ourang Medan is gone. She goes down to the deeps taking all her secrets with her.

There are many theories on this ship that range from natural to paranormal.  Carrying dangerous cargoes and failed black ops. Attacks by vengeful spirits causing the terror upon the crews faces. There is even a link to unit 731, a secret Japanese chemical and biological testing unit that disappeared at the end of WWII.  Whatever the case we at Nightwatch Paranormal can be sure of one thing.  Only the crew really know what happened, and they up to this point haven’t volunteered any information.