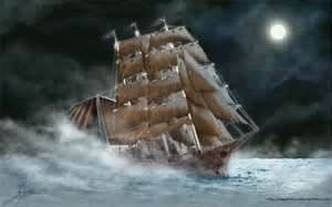 In the very south of South America, there live a group of people known as  the Mapuche.  This little known peoples were able to repel the Spanish  conquistadors from the 16th century for over 300 years.  This allowed  them to keep much of their pre Columbian heritage and mythos intact. The collected wisdom is known as the Chilota mythology.  One of the those bits of  lore is about The Caleuche.

The Caleuche is a ghost ship that appears every night near the Island of  Chiloe, which is an island off the coast of Chile.  The ship appears as a  beautiful and bright white sailing ship, with 3 masts of 5 sails each, The ship  is always full of lights and with the sounds of a party and the people on board  laughing. After she is spotted the ship is then said to disappear or submerge itself under the water. The ghost ship is also known to be able to navigate  while under water.

The Ship is not just any type of ship. The Caleuche is said to be is a kind of conscious being that sails the waters around the area. She carries the
spirits of all those who have drowned at sea. According to Chilota mythology, the spirits of the drowned are summoned to the ship by three Chilota “water spirits”.

After appearing for a few moments, the ship is then said to disappear or submerge itself under the water. According to legend, the spirits of the drowned  are summoned to the ship by Sirena Chilota, her sister Pincoya, and their brother Picoy. Sirena Chilota resembles what we know as mermaids, with the upper body and face of a teen, with long blond hair and golden scales.   Pincoya is said to have long blond hair, be of incomparable beauty, be cheerful and sensual, and rise from the depths of the sea with her totally human like body. Picoy has the body of a sea lion with golden fur and the face of a strikingly attractive human man,  with long blond hair.

There appear to be two types of passengers aboard the luminous vessel. The spirits of those who drowned at sea are said to be able to continue their existence in a sort of paradise like existence, instead of being left lonely and cold in the ocean deeps. They are allowed according to some stories to even visit home once a year to give aid to their families.  However there are also kidnapped fishermen who are kidnapped and forced to perform the duties as crew.

The folklore also says that the evil Brujo Chilote, the equivalent to the male witch, likes to visit the party on the Caleuche. Although they are evil,
they are welcome aboard the ship.  They reach the Ship by summoning up a magical water horse which is said to be able to gallop upon the surface of the ocean.