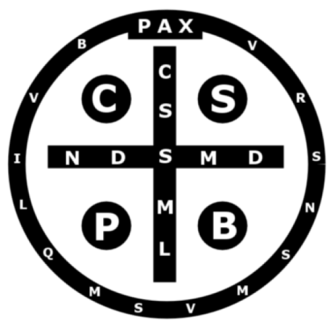 This is a famous formula in Latin which translates roughly to “Go Back, Satan or "Step back, Satan." It has ties to a phrase spoken by Jesus to peter in the New Testament Gospel of Mark 8:53 Vade retro me, Satana or “get behind me, Satan.”

The exact origin of the passage is not fully clear.  The passage came to general attention in 1647. Some self proclaimed witches women who were being tried for witchcraft declared that they had been unable to do harm where there was a cross. The St. Michael's Benedictine Abbey in Metten (founded in 766) was particularly exempt from their influence. A search of the monastery turned up crosses painted on the walls with the formula's initials. No one was sure the purpose of the letters.
No special way of carrying or applying the Medal is prescribed. It may be worn around the neck, attached to the scapular or the Rosary or simply carried in one's pocket. Often it is placed in the fields, the foundations of  buildings or attached to automobiles to call down God's blessing and the
protection of St. Benedict. No particular prayer is prescribed, as the devout wearing itself is a continual silent prayer.
The ritual is often reduced to it’s short form Vade retro satana and  can be used as a form of exorcism. According to H. C. Lea (1896), "As a
rule...it suffices to wear a St Benedict medal devoutly, but, if some special favor is desired, it is advisable on a Tuesday to say five Gloria’s , three
Ave’s and then three more Gloria’s to secure the protection of St. Benedict.” 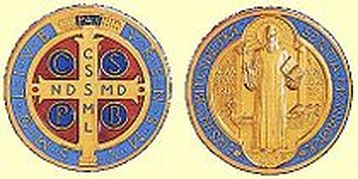